The Original Codex of Vyšehrad

The Codex of Vyšehrad is a unique manuscript of the Romanesque time. It is the oldest manuscript document related to the Czech environment by the circumstances of its origin that was the coronation of Prince Vratislav II the first King of Bohemia on July 15, 1086. The Vyšehrad Codex is therefore sometimes also called the Coronation Gospels of Vartislav II. or the Coronation Codex. Vratislav II included this book in his collections kept at Vyšehrad, where he resided, hence its name of Vyšehrad.

The manuscript includes one hundred and eight parchment folios, out of which twenty six pages are illuminated with portraits of the Evangelists, the genealogy of Jesus Christ, four types from the Old Testament, and Christological cycle of twenty nine scenes. The initial D on folio 68r, depicting the King Vratislav on the throne, initiates reading on the Day of St. Wenceslas, the Czech Patron Saint. This fact proves the Bohemical character of the document.

The two-day exhibition will feature the original Codex of Vyšehrad as well as its facsimile that will be available for viewing with the help of an assisstant. Admission free. 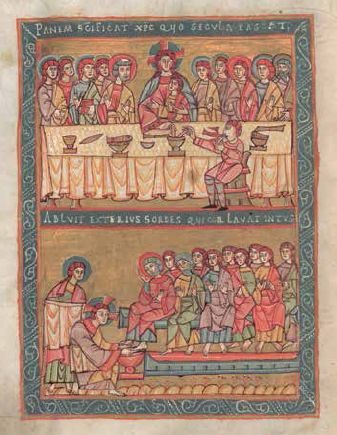 See the Codex of Vyšehrad in the digital library Manuscriptorium >>